Blog
You are here: Home1 / Blog

See our Latest Mixer
The Westfall 6000 Counter-Swirl mixer will be featured at the ACE22 Show in San Antonio, Texas from June 12th through the15th. Visit Booth Number 6089, and see our newest mixer.

Our in-house CFD (Computational Fluid Dynamics) was crucial to the 6000 mixer development, meeting a requirement for complete mixing in 3 diameters. Engineers on site will be able to show you examples of the CFD analyses that we use to design innovative mixers for our customers.

Westfall’s presence at water treatment trade shows has been ongoing for decades.
Trade shows give us a chance to do one of our favorite things — meet old & new customers. We pride ourselves on our responsiveness to customer needs and our ability to listen and problem solve for just about any water treatment application. Our experience providing easy to install mixers with very low maintenance keeps us at the forefront of mixing valve companies. 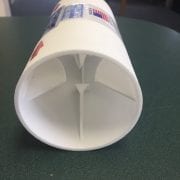 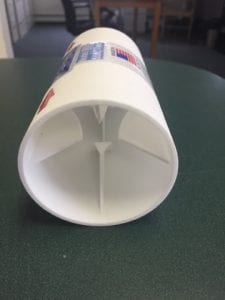 Pipe and patented mixing vane inserts emerge from 3D printing as a preassembled Static Mixer that is glued inside a PVC pipe and saves customers money and time.

This innovation comes in response to customers who asked for Low Headloss Mixer 3050 in the 3/8″ to 5″ (0.95cm to 12.7cm) range, which is too small for cost-effective fiberglass or stainless steel custom fabrication.

Westfall engineers knew that whether the materials used were metal, fiberflass or 3D  printed nylon, the mixer’s high performance would not change. If the geometry stayed the same, the hydrodynamics would be the same.

The durable nylon inserts withstand steady exposure to harsh chemicals, from caustics to gas and oil. 3D printed inserts can be made of a variety of materials, from Kynar to stainless steel. 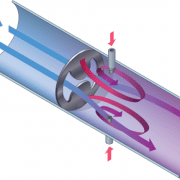 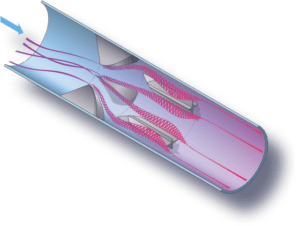 Flow Straightener Model 3000                 Fin-like mixing vanes create vortices to gently blend the incoming flow of water. Then wing-shaped vanes flatten the vortices into a straightened or conditioned outflow for a fully developed velocity profile with minimal headloss in less than 8 pipe diameters.

In parts of the world where water is rationed, savvy customers want to know they’re getting every drop they pay for. If the water utility can’t prove their billing is accurate, they may face volatile public meetings like a customer in the southwestern US did.

The problem was real: if water flowing into the meters was disturbed by swirl or turbulence from pipe bends or uneven pressure, meter readings could be inaccurate. Customers wanted reassurance from their utility company.

The utility took two steps to resolve the problem.

First, they brought Westfall’s CEO, Bob Glanville, to their next planning meeting. By showing graphic illustrations of test results from Alden Laboratories, he proved that the installation of a Flow Straightener would provide the flow meter measurement accuracy these customers sought. 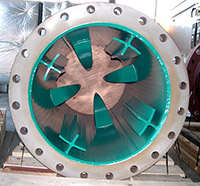 24″ Flow Conditioner Model 3000 prepared for an installation in Texas. View from the downstream end shows the wing-shaped vanes first, followed by the fin-shaped vanes.

their metering device was free of swirl and turbulence, and had a fully developed velocity profile well before it reached the flow meter.

The water utility now installs Flow Straightener Model 3000 at metering points throughout its distribution network. Customers were reassured that the water for which they were billed actually matched the water they received.

According to Bob Glanville, CEO of Westfall Manufacturing, Inc. “This is an easy infrastructure upgrade for water utilities to install, and a smart one to improve their billing accuracy and customer satisfaction.” 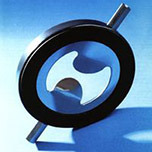 Operators of poultry processing plants, in both the US and Mexico, are now inserting Westfall’s Static Mixers into their waste treatment piping systems at 3 different stages of the clean up process.

Industrial plants like these generate flows of 1 million to 1.5 million gallons of wastewater every day of operation.

Pollutants range from meat, skin and feathers to fat, blood and grit. Before discharging this wastewater, plants must remove all suspended solids and particles in order to meet three levels of regulation: local, state and federal.

Plate Static Mixer 2800 causes rapid, thorough collision of added coagulant chemicals with the many types of suspended solids and particles. The resulting charge neutralization causes the particles to floc within a short lay length.

Pipe Static Mixer 3050 replaces the need for lengthy serpentine piping in both retrofits and new construction. In less than 10 pipe diameters, added polymers are gently mixed to encourage the formation of increasingly larger flocs. Depending on the desired chemical interactions, the flocs will either float or sink for easy removal.

Plate Static Mixer 2800 is used as part of the tertiary treatment process. Its high-performance aperture effectively and thoroughly mixes selected disinfectants like sodium hypochlorite with the reclaimed wastewater prior to discharge or reuse.

Bob Glanville, Westfall President, reports: “Our Static Mixers rely on CFD analysis to achieve optimal performance with less energy in a smaller space. They are ideal for both industrial and municipal Wastewater Treatment Plants in regions that face the competing challenges of growing populations and budget restrictions.” 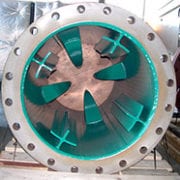 Cryogenic fuels are gases that require extreme low temperatures to be sustained in a liquid state.

They include blends such as the liquid hydrogen and liquid oxygen mixture used to propel NASA’s Space Shuttle.

Accurate mixing and precision metering of cryogenic propellants are critical because their mass flow rate is so much greater than that of traditional fossil fuels.

To insure the precise delivery of these powerful liquid fuels, one US developer of next-generation rocket engines has added Westfall’s Flow Conditioner Model 3000 to its pre-ignition system.

This model is an in-line flow straightener that is proven to provide a (+/- .05%) fully developed velocity profile.

It includes 4 fin-shaped vanes that reduce or eliminate swirl, and adds 4 wing-shaped vanes to suppress excess turbulence and straighten flow. It enables repeatable error-free measurement and delivery of liquids or gases.

This flow conditioner is preferable to a perforated plate conditioner because it significantly limits headloss, avoids fouling and requires little to no maintenance. The interior of Westfall’s Flow Conditioner 3000 can be coated with 3M Scotchkote Fusion-Bonded Epoxy, which effectively resists corrosion and enhances metering for cryogenic propellants in sub-orbital and orbital rocket engines.

Photograph of the downstream end shows the two kinds of low headloss vanes that provide a swirl-free profile for accurate measurement of air, natural gas, water, oil and numerous other liquids and gases. 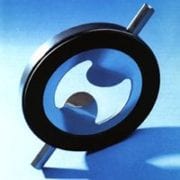 May 4, 2016 Bristol, RI, USA… When a Water Treatment Plant in South Africa needed to increase their conversion of raw water to potable water by up to 57% (without building new infrastructure) they turned to PCI Africa, specialists in engineering and constructing municipal water systems.

PCI Africa then turned to Westfall because they needed to replace a pair of inline static mixers that had been underperforming: creating excessive headloss and inadequate mixing.

This customer required a mixing CoV of 0.05. A CFD analysis of Westfall’s Plate Mixer Model 2800 was reviewed by the customer in South Africa. The analysis proved that the CoV for the proposed mixer would be less than 0.05 at 10 pipe diameters downstream from the mixing plate.

The Westfall units would more than provide the effective mixing needed, and would drop easily into the existing short lay length.

The mixers had to be on location by the beginning of June. The cost of airfreight was prohibitive, and ocean freight would take more than 30 days.

This gave the Westfall team a narrow window of 5 working days to custom manufacture two 40″ stainless steel plate mixers with injection ports and flanges, put them through a 3-stage inspection process, then crate for delivery to the U.S seaport.

On April 22, Westfall shipped the order.

Westfall’s sales rep at JLS International reports that PCI Africa is delighted with Westfall’s affordability and speed of production on a custom order of this size. Because of the simple drop-in installation, the new mixers require no new infrastructure and will cause minimal interruption to the customer’s potable water delivery service. 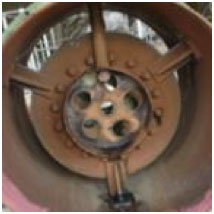 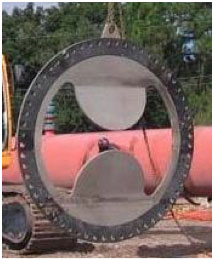 In comparison, Westfall’s elegant solution is a drop-in plate that is proven to provide high-shear mixing while preserving necessary pressure. 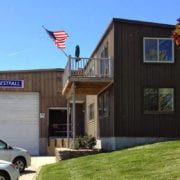 Feb 16, 2016 Bristol, RI, USA… Linde Engineering of Munich, Germany builds large processing plants. When they were hired by Gassco (the Norwegian state-owned natural gas distribution company) to build a new gas terminal in Emden, Germany, one of their challenges was to find a proven static mixing device to blend the gases coming from two separate Gassco pipes into the new terminal.

Gases of varying densities, compositions, temperatures and flow rates would have to be thoroughly blended before entering the storage tanks in the new facility. The mixer would have to do the job with minimal headloss.

The project engineers first selected a static mixer from a prominent European company, but their product did not pass Gassco’s stringent tests for an in-line mixer that would last at least 30 years with little to no maintenance.

CFD and FEA analysis were conducted on a Westfall in-line static mixer 3050. The Westfall Static Mixer 3050 easily passed the test, but the cost of shipping the mixer welded into a 12’ (3.6m) by 48’ (15m) pipe from the US to Germany was prohibitive.

Westfall was in danger of losing the job.

By manufacturing and installing the Static Mixer 3050 in Germany, the project could be closely monitored for adherence to German building codes. By creating a customized licensing agreement allowing precision manufacturing of a patented US product in Germany, prohibitive shipping costs from the US to Germany were eliminated.

Westfall’s inline Static Mixer has now been welded into the underground pipeline bringing natural gas from the Norwegian Continental Shelf to the new Emden terminal on the German coast. Currently Linde Engineering is conducting final tests on the new facility and plans to inaugurate service to the people and businesses of northern Germany beginning July 2016.

This paper describes in detail the general functions and uses for low headloss mixers and why they are in demand today.